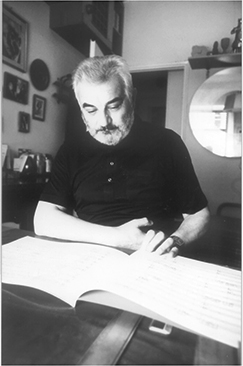 Play all audio recordings
The noted Italian composer and pedagogue, Franco Donatoni, started studying violin at the age of 7. He commenced his musical training with Piero Bottagisio at the Verona Liceo Musicale. After further studies in composition with Ettore Desderi at the Milan Conservatory (1946-1948), he was a student of Lno Liviabella at the Bologna Conservatory, where he took diplomas in composition and band orchestration (1949), choral music (1950), and composition (1951). He pursued advanced composition studies with Pizzetti at the Accademia di Santa Cecilia in Rome (graduated, 1953), and then attended the summer courses in new music in Darmstadt (1954, 1956, 1958, 1961).
Franco Donatoni taught at the Bologna Conservatory (1953-1955), the Turin Conservatory (1956-1969), and the Milan Conservatory (1969-1978) before holding the chair in advanced composition at the Accademia di Santa Cecilia. He also taught advanced composition at the Accademia Musicale Chigiana in Siena (from 1970), and was concurrently on the faculty of the University of Bologna (1971-1985). In addition, he taught at the Civica Scuola in Milan, the Perosi Academy in Biella, and the Forlanini Academy in Brescia; also gave master-classes.
Ordered by year. Most recent works appears first