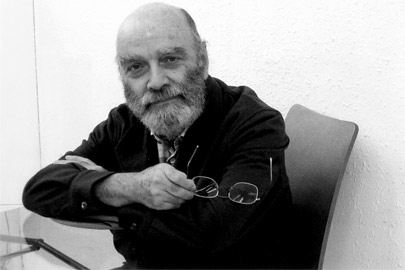 Play all audio recordings
Luis de Pablo was born in Bilbao, his complete name is "Luis de Pablo Costales" but after losing his father in the Spanish Civil War, he went with his mother and siblings to live in Madrid from age six. Although he started to compose at the age of 12, his circumstances made it impossible to consider an artistic career, and so he studied law at the Universidad Complutense. For a short time after graduating in 1952, he was employed as legal advisor to Iberia Airlines, but soon resigned this post in order to pursue a career in music. Although he received composition lessons from Maurice Ohana and Max Deutsch, he was essentially an autodidact in composition. His participation at the Darmstadt courses in 1959 led to the performance of some of his works under Boulez and Maderna (Heine 2001).
He was awarded Spain's Premio Nacional de Música for composition in 1991.
In Spain, he founded several organizations: Nueva Música, Tiempo y Música, and Alea and organized several contemporary music concert series, for example, the Forum Musical and Bienal de Música Contemporánea de Madrid. He was particularly concerned with promoting understanding in Spain of the Second Viennese School, publishing translations of Stuckenschmidt's biography of Arnold Schoenberg in 1961, and the writings of Anton Webern in 1963 (Heine 2001). He is much in demand as a teacher, both in Spain and internationally.
The world premiere of his opera La señorita Cristina (Miss Cristina), based on a novel by Mircea Eliade, with a stage design by José Hernández, took place in 2001 at Teatro Real (Royal Theatre) in Madrid (Salas 2001).
Ordered by year. Most recent works appears first