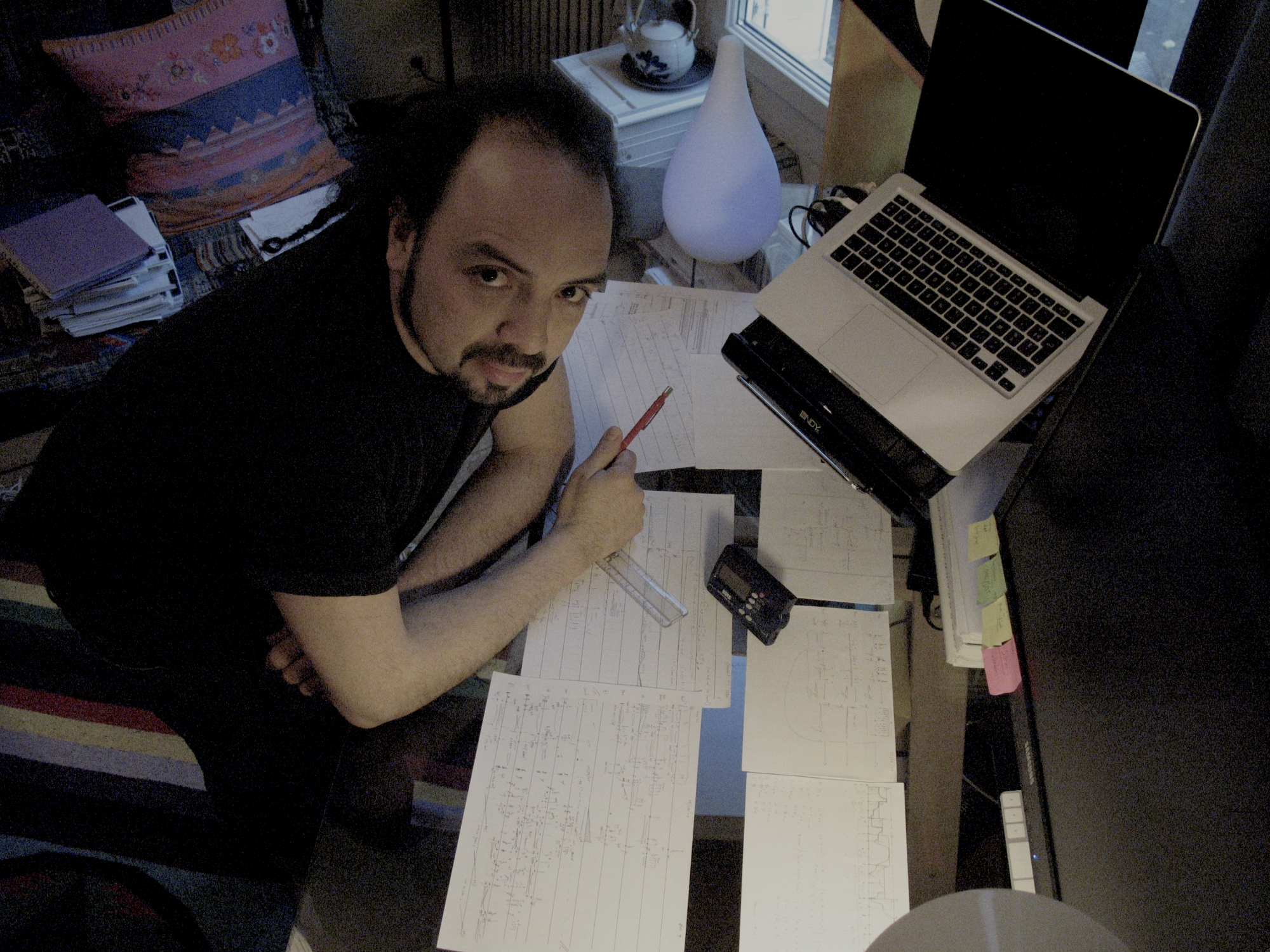 Play all audio recordings
« Mutations saturées sur le devant de la nuit II is a very beautiful work »
Philippe Leroux
« A genuine musical intelligence, very high artistic qualities »
José Manuel Lopez Lopez
« True poetic force »
Daniel D'Adamo
An innovative artist whose process embodies the figures of composer, guitarist, improviser, interactivity designer, multimedia artist, curator and researcher, Mauricio Meza is native of the Yucatán Peninsula. His musical imaginary is nourished by his forays into the rainforest on the hunt for hidden cenotes, by an intimate contact with the original cultures of the center, south and southeast of Mexico, as well as with poetry, arts, dance, cinema, philosophy, and by his interest on the subjects of cognition, imagination and digital technologies. His music, emerging from a creative process rooted in vivid and intense oneiric experiences, seeks to propitiate the individuation of the unheard-of by setting-up a complex network of relationships voluntarily oriented towards the mise-en-abyme of the boundaries of aurality, by applying musical materials and conceptual tools such as emergence, friction, resonance and interaction, into the modulation of a fluctuating chaos concealed between the imaginary and the concrete. From a perspective that interrogates the relationships between aural imagination and digital technologies, his current artistic and research orientations focus on the study and exploration of the notions of corporeity, interactivity, instrumentality, participativeness, and aural and psychoacoustic heritage. His catalog reveals a spectrum of artistic activity that encompasses chamber music, electroacoustic music, installation, sound objects, software, performance, improvisation and the Interactive-Flow series Quantum Leap Graffiti (QLG).

He discovers at a very young age a creative relationship with music, relationship that he keeps alive and in good shape by making of musical creation a full-time activity. Self-taught in the early stages of his creative process, from his beginnings at an early age until Ixcoyohualli (2004), the first piece that he registers in his catalog, he emigrated to Europe in 1999, where he works on the professional development of his artistic project, while at the same time on the acquisition of a formal musical and artistic education. Graduated in Composition from the Blanc-Mésnil Conservatory (2008), under the tutelage of Philippe Leroux, he holds a Bachelor's Degree in Musicology (2005), as well as a Master Degree in Art and Digital Technologies (2006), from the University of Rennes, and a "Gold Medal" in Instrumental Composition from the Conservatory of Reims (2015). In 2018, he obtained, summa cum laude, a Master in Composition and New Technologies from the University of Reims with the thesis Tracing the body, tracing the listening. An approach to the mediation of the individual and collective body in the process of musical creation in analog and digital environments, having as advisers Jean-Marc Chouvel (IReMus-Sorbonne) and Pierre Rigaudière (URCA). Through personal encounters, his work has received comments and criticism from Georges Aperghis, Pierluigi Billone, Alain Bioteau, Daniel D'adamo, Julio Estrada, Ivan Fedele, Brian Ferneyhough, Arturo Gervasoni, Jonathan Harvey, Michael Jarrell, Magnus Lindberg, José Manuel López López, Yan Maresz, Mario Mary, Luis Naon, Gérard Pesson, Niels Rosing-Schow, Marco Stroppa, German Toro Perez and Horacio Vaggione for composition; and Joëlle Léandre, Phil Minton, Jacopo Andreini and Hélène Breschand in regards to improvisation. His music has been performed in Brazil, Canada, Germany, France, Italy, Luxembourg, Mexico, Spain and the USA by internationally renowned artists among which stand Accroche Note, TM+, Cairn, L'Instant Donné, NOISE, Talea Ensemble, Arditti Quartet, ABSTRAI Ensemble, Mivos Quartet, soundinitiative, CEPROMUSIC, Interensemble and Ensemble Chrisalyde, within the framework of international festivals such as the Darmstadt festival, the Acanthes festival, the soundOn Festival of modern music, the Ebruitez-vous festival, the International Forum of New Music Manuel Enriquez, the New York City Electroacustic Music Festival and the Musica de Agora na Bahia festival.

In 2012, he was invited to participate in the international conference The Global Composition, conference on Sound, Media and the Environment (Dieburg, Germany), where he presented Doppelgänger-Oblivion: Timeline (QLG 4), an interactive multimedia installation device that explores the tension between the concepts of interactive flow, digital traces and emergent instruments. In 2017, [L’emprise de Panurgos] ::: [Du feu de Tunguska] (QLG 5), an interactive device that continues the exploration of these concepts, was selected within the framework of the New York City Electroacustic Music Festival (NYCEMF).

Awarded by the prestigious National System of Art Creators (SNCA) a three year funding grant given by the Mexican government in 2012. His work Confabulation 1.7, for chamber ensemble (2009-2010), obtained first place in the San Diego New Music / NOISE International Composition Prize in 2011, and Honorable Mention at the International Composition Competition "Cittá d'Udine" in 2010, and has been the subject of a professional record production, as well as performed on numerous occasions. He has received commissions from Césaré-Centre National de Création Musicale –Colapsos inminentes, 2016 ; An instrument in Your hands, 2017–, from the French Ministry for Culture and Communication –Mitote, 2015 –, from the Zentrum für Kunst und Medientechnologie (ZKM) –Mixtli Yei, 2008–, and the Center Acanthes / Ircam –‘Iweiyari, 2007. He has been a composer in residence at the Talcoat Center, France, in 2007 and at the ZKM, in Karlsruhe, Germany, in 2008. Between 2014 and 2017 he was a composer-in-residence at Césaré-Centre National de Création Musicale, where he worked in the development of the QLG project.

His keen interest in the use of technology in the art domain leads him to investigate the relationship between heuristic and generative methods of creation and autonomous computer systems of composition. In this context, his piece Woes-war-schollichwer-den (QLG 2), for indeterminate instruments, "Autonomous" computer and public participation (2006), was the object of study and software development within the framework of the doctoral thesis by Karim Barkati, Entre temps réel et temps différé. Pratiques, techniques et enjeux de l'informatique dans la musique contemporaine (Paris 8 Saint Denis University, 2009). In 2017, the Art Music Review, sponsored by the Federal University of Salvador Bahia, published his article Capturing, Tracing, Transferring the aural flux. Convergence, interactivity, in situ composition and emergent instruments in […] S […] S […] S […]. The same year, at the Center de la Documentation de la Musique Contemporaine (CDMC), in Paris, he gave the lecture Capter, Tracer, Transférer l ’« écoute ». De la composition in situ à l'instrument emergent dans Doppelgänger_Oblivion, within the framework of the international colloquium Mouvement et modèles dynamiques dans la pensée musicale (IReMus - Paris Sorbonne), within the program of the aCROSS festival. In 2018, he gave a lecture on his work in the presentation entitled Composing from a traceology. Analysing the traces of gesture to « construct listening », within the framework of the Analysis and Creation seminar, organised by the Ircam, the Collegium Musicæ and Sorbonne Université. In 2019, he gives the conference Towards a practice of composition as traceological process.  A comparative analysis to eua’on by Julio Estrada and Mycenae-Alpha by Iannis Xenakis within the framework of the international Electroacustic Music Studies network (EMS) conference, at La Casa del Lago in Mexico City. He has given master classes in Composition and New Technologies at the Federal University of Rio de Janeiro and at the University of Salvador Bahia, in Brazil, and in Mexico, at the Higher School of Music of the National Center for the Arts.

His work has been recognised and supported by prestigious national and international institutions such as the National Council for Culture and Arts, Fonca, ZKM, Internationales Musikinstitut Darmstadt, Césaré-CNCM, Ministry of Culture and Communication of France, Ircam, Centre Acanthes, Centre Talcoat, San Diego / New Music association, Taukay Editions, Conservatory of Reims, Conservatory of Rennes, Conservatory of Blanc-Mésnil, Nanterre House of Music, University Paris 8 Saint-Denis, University of Rennes, University of Reims and the Federal University of Rio de Janeiro, Universidad Nacional Autonoma de México, Universidad Autonoma Metropolitana, BabelScores, Muslab, OCA, CMMAS, CICM, SACEM, CDMC, INBA, FIMNME, EMS. Between 2015 and 2018, he is in charge of the direction of the french edition of MUSLAB-international exhibition of electroacoustic music, where he acts as coordinator and curator, at the same time that he promotes international exchange, programming numerous pieces by French and Mexican composers.

He currently lives and works between the cities of Paris and Marseille, in France, and Cancun, in the Yucatan Peninsula. He is a Phd candidate in Research, Composition and New Technologies, in the framework of an international cotutelle exchange program held by Sorbonne Université, the Institute for Research in Musicology (IReMuS), the Science and Technology of Music and Sound Lab (STMS Lab), Universidad Nacional Autonoma de México (UNAM) and the Laboratory of Musical Creation (Lacremus), with the thesis Vers une pratique de la composition comme processus trace-o-logique. Convergences formelles numériques et morphogenèses de l'interactivité dans le processus de création musicale (Towards a practice of composition as a trace-o-logical process. Digital formal convergences and morphogenesis of interactivity in the musical creation process). He continues the development of the Quantum Leap Graffiti project in collaboration with the pianist Nadia Arce, with whom he also co-directs the interdisciplinary project El Tiempo de la Vida. He is founder and artistic director of AtipicA: Interdisciplinary Itinerant Workshop of Artistic Creation. He is founder and director of The Platform-Observatory for the Integration of Creative and Artistic Processes (POietiCA). His music is being currently published by BabelScores.
Website:
Ordered by year. Most recent works appears first 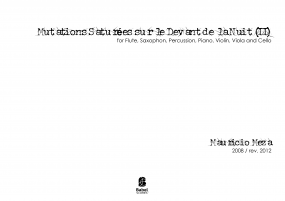 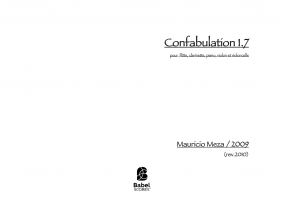