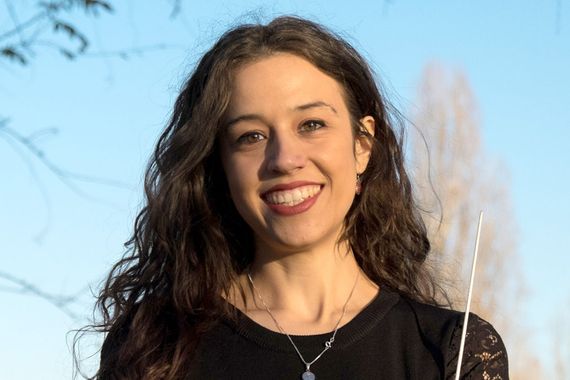 Play all audio recordings
Sara Caneva is a composer inside a conductor.
Podium experience crossed her composing mind, leading to a special blend and care for the gestures that produce sound - in any Music, pursuing the aim that immediacy and depth can go together.
Appointed composer in residence 2018 at the Schleswig-Holstein Künstlerhaus in Eckernförde, in 2016-2017 she has been fellow composer at the Teatro dell'Opera di Roma, where she also conducted the world premiere of a contemporary opera diptych including her stage work On-Off.
She is currently shortlisted for LaMaestra Conducting Competition at La Philharmonie de Paris, and invited to audition for the Junior Conducting Fellowship at the RNCM in Manchester.
Since her debut in opera conducting in 2014, she has been active both as composer and conductor in internationally renowned contexts, working with orchestras like Danubia Orchestra Obuda, Savaria Symphony Orchestra, Orchestra Regionale Toscana, Südwestdeutsche Philharmonie Konstanz, LaVerdi, Youth Orchestra Teatro dell'Opera di Roma, Berlin Sinfonietta. Between 2015 and 2017 she conducted the Ensemble Formanti, oriented on contemporary and improvised music. Among her most recent engagements, she brought on stage the premiere of the multimedia opera "Trilogy in two" in a tournée with Helga Davis and the Schallfeld Ensemble.
​
Her music has been awarded in several international selections and is being played in venues such as Teatro La Fenice di Venezia (2019), Parco della Musica Roma (2018), Teatro dell'Opera di Roma (2017), Musiikkitalo Camerata Helsinki (2018), Mozarteum Salzburg (2017), Moscow Philharmonic (2016), among others. She wrote for performers such as Neue Vocalsolisten Stuttgart, Schallfeld Ensemble, Mdi Ensemble, Moscow Contemporary Music Ensemble, PMCE, NAMES Ensemble, the pianist Ricardo Descalzo, among others. Since 2018 her works are published by Edizioni Suvini Zerboni.
​
She currently pursues an independent project researching impact of visual cues on the listening perception and social aspects of sound ecology through treasure hunts with sounds and soundwalks.
Ordered by year. Most recent works appears first