Sina Fallahzadeh (b.1981) is an Iranian composer, living in Paris.

Prior to that, he earned his master's degree in piano performance from the Art University of Teheran.

From 2015-2016, he attended to the IRCAM’s practical training in Composition and Computer Music (Cursus) in Paris.

Sina was a finalist in the 2012 Métamorphoses competition, the winner of the Luigi Russolo competition in 2013, and among the winners of the "Diaphonia and XelmYa+" in 2017.

Sina has studied composition with Gérard Pesson, Denis Dufour, and Édith Canat de Chizy in Paris. As in Geneva, he had the chance to study composition with Michael Jarrell as well as Luis Naón and computer music with Éric Daubresse. And in Tehran with Alireza Mashayekhi.

Sina collaborated closely and frequently in numerous workshops, master-classes, and courses with many composers such as Franck Bedrossian, Marco Stroppa, Hèctor Parra, and Frédéric Durieux.

Sina is considered as composer integrating elements of rich cultural background with modern and contemporary elements to acquire a singularity of a unique perspective.

The selected elements come from various musical cultures, historical epochs, and geographical places. Each piece for him has a very profound relationship with culture.

Hence the source of inspiration seeded in the cultural references and images coming from far away, or in objects and symbols belonging to somewhere else.

The morphological development of the sound gestures, the evolution of the timbre and spatial interaction of the different sound layers have a crucial place in his musical composition. 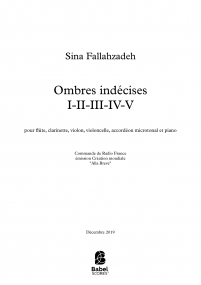