12,00 €
Printed format (+14,04 € printing and shipping). Colissimo5-11 days aprox.
Digital version (+0,00 €) instant download
When you buy a score, you can contact the composer right here!
Specifications
Region
North America (Canada - USA)
Estimated Duration
6 - 10min
Date
2010
ISMN : 979-0-2325-0351-6
In Stock
Notes on this piece
Add to a playlist
In 12th June 2009,the tenth Iran’s presidential election was held and 80 percent of the
voters participated in the election. The following day, after the announcement of the
results, millions of Iranian in all around the country, especially in the capital, Tehran,
protested peacefully shouting: “Where is my vote?”

But, the peaceful protests clashed with security forces including police and Basiji militia,
and lead to death, exile, imprisonment, and torture of hundreds of students, journalists,
human right activists, politicians, and common people.

Although the demonstrations have been suppressed by government, the problem is still unsolved and people are seeking new ways to protest and retrieve their votes. 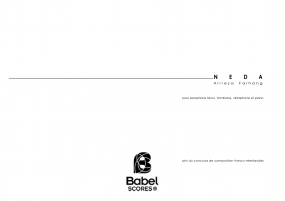