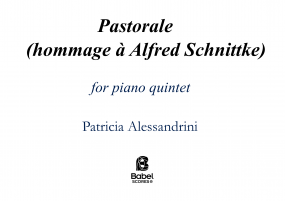 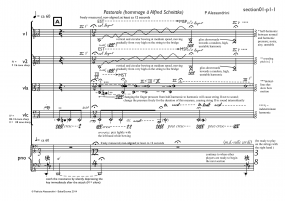 16,00 €
Printed format (+16,20 € printing and shipping). Colissimo5-11 days aprox.
Digital version (+0,00 €) instant download
Rent performance materials
When you buy a score, you can contact the composer right here!
Specifications
Region
Europe
Estimated Duration
11 - 15min
Date
2014
ISMN : 979-0-2325-1124-5
In Stock
Notes on this piece
Add to a playlist
For piano quintet with live electronics system for the piano.
This piece is centered around two existing works: Beethoven's Pastoral Sonata, Opus 28, and Schnittke's Quintet. These works are linked by a single stylistic factor, which takes on different meanings according to the aesthetic projects associated with them. In the case of the Pastoral Sonata, the characteristic repeated pedal tone of the first movement may be interpreted as evoking a seemingly unchanging landscape in which nuances come to the fore over time; over the course of the movement, this material takes on other attributes as repetition becomes a motivic element in itself. The Schnittke Quintet features obstinate, steadily repeated notes which create an effect of a certain unease when they appear for the first time in Movement I. These repetitions also evolve into related materials over the course of the quintet, such as long-held notes and trills, and a reduction of the musical language to a few simple repeated figures in its ending. Given the dedication in the title to the memory of his mother, these repeated notes may be seen as creating a sense of stark inevitability, especially in the repetitions of the first movement, which give way to a certain assuagement, or a tenderness of memory perhaps, in the closing figures of the last movement. In this composition, I explore repetition in the light of the respective historical and aesthetic contexts of the two works referenced, and how they are articulated by various interpretations, and illustrated by different recordings; modified versions of these recordings are re-injected into the new composition through the live electronics system for the piano, which in a sense modifies its resonance to reflect these materials.
Patricia Alessandrini
Composed in 2013-14Commission from Musikfestival Heidelberger FrühlingPremière: 2 April, 2014:  Diego Tosi, Katya Poplyansky, violin; Karolina Errera, viola; Rebekka Markowski, cello; Matan Porat, pianoPresse:
http://www.rnz.de/mobilheidelberg/00_20140405060000_110655200-Patricia_Alessandrini_bei_der_Fruehlings_Festi.html
Facebook LinkedIn Reddit Tumblr Twitter Pinterest