18,00 €
Printed format (+14,80 € printing and shipping). Colissimo5-11 days aprox.
Digital version (+0,00 €) instant download
Rent performance materials
When you buy a score, you can contact the composer right here!
Specifications
Region
Europe
Estimated Duration
11 - 15min
Date
2001
ISMN : 979-0-2325-0955-6
In Stock
Notes on this piece
Add to a playlist
"Each celestial body, in fact each and every atom, produces a particular sound on account of its movement, its rhythm or vibration. All these sounds and vibrations form a universal harmony in which each element, while having its own function and character, contributes to the whole." Pythagoras (569-475 BC) Feedback was composed during the winter of 2000-2001. The idea, the starting point of the work, is an aesthetic exploration of feedback an acoustic / electronic phenomenon which occurs in many electronic devices. The sound world of the piece is the abstraction of this phenomenon from the real ‘scientific’ world to an imagined ‘artistic’ world, from Pythagorean principles of the sound system to musique acousmatique. A sounding event, like a textural gesture to which almost every instrument in the orchestra contributes, is perceived as a single sound. Through a kind of anagoge, reduction, a complex multi-player sounding event is abstracted into a single sound which is far removed from the ‘musical note’. The whole event becomes an abstract shape; an abstract sound construction with its own tensions and functions that could not be fully realized with traditional conceptual tools. This construction is processed, analyzed, transformed and developed, in time, frequency, spectrum, space and amplitude. The work’s gradual evolution takes the listener on a journey where time is suspended, squeezed, stretched, and even stopped. In Feedback various levels of textures, figures, gestures and climaxes come together to create a musical interest and meaning as they undergo developing variations or transformations in the course of the piece. 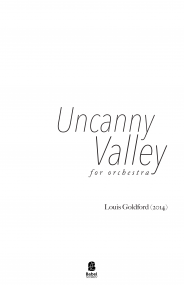