9,00 €
Printed format (+14,80 € printing and shipping). Colissimo5-11 days aprox.
Digital version (+0,00 €) instant download
Rent performance materials
When you buy a score, you can contact the composer right here!
Specifications
Region
North America (Canada - USA)
Estimated Duration
6 - 10min
Date
2010
ISMN : 979-0-2325-0636-4
In Stock
Notes on this piece
Add to a playlist
Asparizione is a neologism invented by Giorgio Caproni, in the attempt to describe a reality which, by hiding, shows something more of itself: the poet typically evokes the experience of a perception, or rather the memory of a perception, but as little and vague as possible, almost a ghostly apparition. In his collections of poems, Asparizioni, the memory floats from places to sensations, from human figures to mere ghosts, yet never really stating, or completely depicting reality. I was then fascinated by Caproni’s work so deeply that I decided to cover his works more thoroughly, to the point of starting a full cycle of works, this short piece representing the first piece. In fact, I found in many different works this very same fascinating description of reality, and the poems I picked for this piece, Quattro appunti, represents a very good example. Everything, from voice, to dynamics, to timber, is just mentioned, just lightly (or just a little more evidently) touched, but never “stated” with violence. As much as Caproni is always proposing himself, and his poetry. With an appealing delicacy, but never omitting the essence of things.
Facebook LinkedIn Reddit Twitter
Instrumentation
soprano and ensemble
Recording
Score Details
Format - A3 / Tabloid
Pages -
Similar Pieces 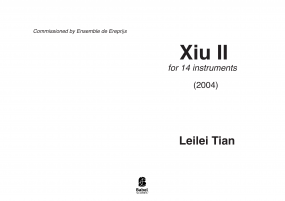