as in a mirror, darkly

Ask a question
Specifications
Region
Europe
Estimated Duration
11 - 15min
Date
2010
ISMN : 979-0-2325-0322-6
In Stock
Notes on this piece
Add to a playlist
In creating my new piece for Klangforum Wien, the things that moved me included aspects of “impurities” such as those that occur in (old) films due to dust particles and scratches, or that are revealed when one peers through scratched glass. For me, two points were important here: first the coincidental way in which these impurities come to be (since they are not ‘integral’ to the material but rather ‘happen’ to it), and second the possibility of using such chance occurrences as a theme in their own rite by projecting them into a more-or-less empty space.
At the centre of this composition, therefore, is just such a randomly occurring phenomenon – realised as isolated events distributed in a seemingly aimless way, floating within the space without being related to one another or anything else, with the musical action virtually frozen.The use of repetition and constant (minimal) changes is an important part of the way in which I compose. Applying this method to language, for example, changes the meaning of the words with each repetition of a sentence or a phrase – there does remain a certain connection or relatedness to the original, however. It was in the same way that this work’s title arose; in its (momentary) form, it has become merely a reference to itself, to its ‘original-original’ version – and thus its own quasi-representative. 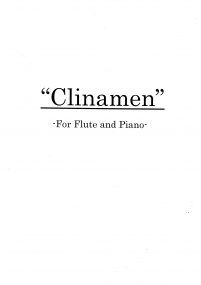 Clinamen
...walk now and then into the breath that blows coldly past...
search controls