The first was premiered in August 2003, at the Colón Theatre in Buenos Aires by Ancuza Aprodu (piano) and Tierry Miroglio (marimba), members of the Ensemble Antidogma Música, Torino.

The second was premiered in October 12, 2003 at the Mafra Festival (Portugal) by Filipe Pinto Ribeiro (piano) and Pedro Carneiro (marimba).

A global description of this work would show a contrasting and complementary pair of pieces put together.

The first one is mainly fragmentary. It is constructed as a succession of episodes in which harmony and vertical issues are the most relevant aspects.

On the other hand, the second one is mainly conceived in a linear manner. The result is a continuous music that has no rest from the beginning to the end, in which the canon technique is present in a more or less strict way.

To be played properly, the second piece requires a special training for the performers. 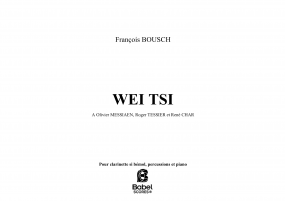