10,00 €
Printed format (+16,20 € printing and shipping). Colissimo5-11 days aprox.
Digital version (+0,00 €) instant download
Rent performance materials
When you buy a score, you can contact the composer right here!
Specifications
Region
Europe
Estimated Duration
11 - 15min
Date
2009
ISMN : 979-0-2325-1602-8
Notes on this piece
Add to a playlist
Fake-polyphony was composed in 2009 for chamber ensemble with conductor following a workshop with the Ensemble InterContamporain where I coud try sections of the piece with the members of the Ensemble.
I am often blamed with writing music that lacks the polyphony. This is not primarily valid for the weaving method of the individual voices but more the overall multidimensional musical thinking. One of the main goals of composing Fake-polyphony was the intention to solve this problem and create a music material in which the polyphonic thinking of the parts is obvious. However, while composing the piece I realized that it was fake polyphonic, so the voices are not basically complementary but rather pass each other. Therefore I kept composing with emphasizing the individuality and independence of the instruments.
In the struggle of the real and the fake polyphony I managed to compose the music that was still my own one. It could happen by finding the solutions for the instruments as they cross each others’ path, so they make inseparable connections.
In this piece the musicians and the conductor try to impress each other which only succeded occasionally. Their meeting points become audible only accidentally and unintentionally.
World premier: May 26, 2010 – Con Tempo, Hungarian Radio, Budapest. Eszter Krulik, Villő Oláh, Péter Szűcs, György Gyivicsán, János Nevelő, László Tömösközi, conducted by Balázs Horváth
Instrumentation
Clarinet in Bb
trombone
percussion (2)
violin
violonCello
Recording
concert recording of the premiere played by Eszter Krulik
Score Details
Format - A4 / US Letter
Pages - 76
Similar Pieces 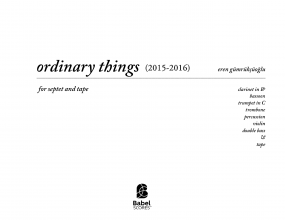