13,00 €
Printed format (+16,20 € printing and shipping). Colissimo7-14 days aprox.
Digital version (+0,00 €) instant download
Rent performance materials
When you buy a score, you can contact the composer right here!
Specifications
Region
Oceania
Estimated Duration
11 - 15min
Date
2001
ISMN : 979-0-2325-1792-6
In Stock
Notes on this piece
Add to a playlist
I – Burnt
II – Polishing
III – Burning
IV – Polished
Although the usual selling-point of the ubiquitous Pierrot-plus-percussion sextet has been its versatility and timbral variety – an economical, matchbox-sized orchestra – it may also be viewed as a highly problematic ensemble with its own peculiar dynamic and identity, as rich with compositional challenges as the string quartet. Polishing Firewood is the first in a potential cycle of six works for the combination, exploring its internal relationships by isolating each of its members in turn.
Of the six, the cello is the instrument most at risk of being overshadowed by the others, so turning the spotlight on it necessitates a particularly thorough rethinking of the sextet. Even though its part in this work is virtuosic and demanding, I would hesitate to describe the cello as a soloist: there are passages when its role is almost the opposite. Nonetheless, it is the role of the cello and its relationship to the others that govern the whole shape of the piece. For example, the second movement, “Polishing”, unfolds as a series of duets for the cello with each of the other instruments: the cello has no material of its own, but assumes the role of a connecting thread which eventually smooths out the contrasts between the others. Similarly, it is the cello which provides the underlying momentum for the wildly spiralling third movement, “Burning”, while the other five players are divided into two constantly-changing groups (one supporting the cello and the other opposing it).
Polishing Firewood draws its title from Arundhati Roy’s 1997 novel The God of Small Things. The arresting poetic image is reflected in several aspects of the work: its characteristic sonority, with the “woody” aspects of the cello’s sound amplified and extended by the rest of the ensemble (particularly baroque violin, bass clarinet and wooden percussion), the nature of its rhetoric, a paradoxical combination of delicacy and violence, and the tragic irony of its overall dramatic plan. The piece also borrows one other element from the novel: the way in which poignancy is heightened by the narration of events out of chronological order.
Instrumentation
piccolo|alto Flute|Clarinet|Bass clarinet|baroque violin|Cello |Percussions|Piano
Score Details
Format - A4 / US Letter
Pages - 80
Similar Pieces
Kav Yankıları / Echoes of Tinder
Yiğit Kolat
Customers Who Viewed This Piece Also Viewed: 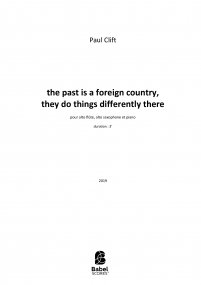 the past is a foreign country, they do things differently there
search controls