My string quartet resulted from a proposal from the Beethovenfest 2005 (which commissioned the work) to explore how Beethoven’s late quartets still resonate in our times. At a general level, the relations between my piece and Beethoven’s last works touch upon the problem of how expressivity and lyricism can be allowed to emerge in spite of, or indeed from, severe compositional constraints. In Beethoven’s case, one can witness this in the way in which he designs his thematic materials to be effective within the constraints of older contrapuntal techniques (such as the fugue) as well as specific large-scale harmonic relationships (such as the pull toward the subdominant region, in conflict with the attraction of the dominant); in other words, how his expressive needs take advantage of the limits imposed by a particular type of discipline. The inherent tension that results from such types of situation has confronted me directly for many years and resulted in a number of different solutions. A common response to this in several of my recent works has been to focus on constraints that primarily are of a temporal nature. In my quartet, as in Athanor, for orchestra (2001) and Ombre/Miroir, for flute and ensemble (2004), elaborate systems of temporal cycles are designed in order to control the length and tonal color of musical phrases, and their relation with each other in the global design. This type of constraint offers a chance to explore the relations between chronometric and perceptible time, through the way in which different types of musical materials “fill” the temporal cycles.

On a more concrete level, I imagined my piece as the locus for a scene on a sort of imaginary theater stage, one on which we would witness Beethoven’s mind working on his last string quartet, op.135, trying out ideas, modifying them, drawing parallels and connections between them. However, lest one would expect from this introduction to hear a sort of pastiche of Beethoven’s work, I hasten to add that there are very few direct allusions to the original; rather, some specific ideas of op.135 are used as impetus to create alternate trajectories, remote images, new dramatic chronologies. One such example appears at the beginning of my quartet (after the two pizzicatos of the first measure): it is a fairly direct allusion to Beethoven’s work, as one can briefly hear a slightly modified version of the very beginning of op.135. But here, this initial gesture is not followed by other parts derived from the first movement of op.135, but is immediately slowed down to a considerable degree, and followed by resonances in echoes. It is then inside the opening created by this stretched-out time that the new work unfolds by progressive discoveries, additions and detours. A bit further, another example shows a more abstract type of relation to Beethoven’s work, one in which the hocket of his quartet’s second movement is used as a conceptual impetus rather than direct allusion: the layers of the hocket were taken apart, modified and reorganized in order to gain a completely different dramatic role: in my work, each line of the polyphony is progressively introduced in four separate sections, each one dominated by a different instrument (first, viola, then second violin, cello and finally first violin). Since the process is cumulative, it is only in the last presentation that all four voices join together to render a sort of equivalent to the obsessive climax of the second movement of op.135. 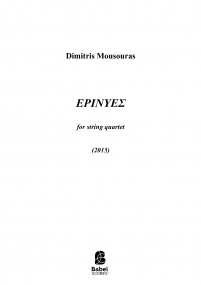 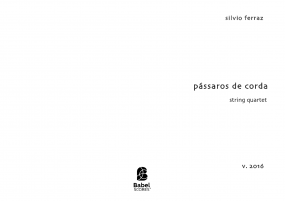 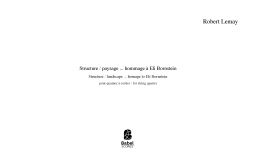 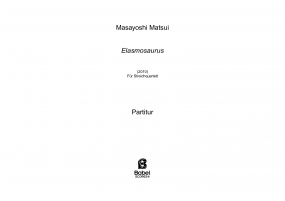