Simultaneously, the cacce "Apposte Messe" by Lorenzo da Firenze lept out of the bookcase and, striking my noggin squarely in the middle, suggested in a loud voice that the amorous hunt without dogs and riders form the template from which to compare unfamiliar strangers with friends. In other words....

The cacce by Firenze is not intended as a reference to an older stylistic genre, but to serve as a constant from which to compare the transient characteristics. Much like the scientific method, in which a certain property is standardized, against which the experimental measures may be compared in order to develop quantifiable and repeatable results, the procedure of Apposte Messe conceptually assumes that the cacce has a known objective property or quality against which an other may be compared.

That the cacce will serve in the capacity of an objective/known quality is risky in the scientific realm as quantification of a myriad of parameters (ie. subjectivity of subject, experimenter, performer or performance medium, and the development of meaningful measures, to name just a few) is doubtful. BUT for the purposes of artistic expression, the cacce presents a well-defined stylistic genre as template, which is only partially realized as nearly every tone becomes a carrier of transient airflow.
(Mike Edgerton)

Note 2
Professor Gary Verkade writes: "Artists in the 20th Century became interested not only in color itself as a means of expression, free from the representational, but also in the actual physical process of painting. Composers of music also became interested not only in the new forms having little or nothing to do with the traditional forms of sonata, rondo, etc., but also in the actual physical process of making music. Michael Edgerton, for example, became very interested in the in-between steps of this process, the stages in which the pipe does not speak to its fullest potential, and worked with these stages expressively, in other words formed these processes into a musical statement. This interest was one of two which contributed to the making of this piece.

The title refers to a piece by Lorenzo da Firenze for two voices in canon to a text which is concerned with the hint, a caccia. Intense caccia composition took place for a period of about 40 years, ca 1340-1380, and it is a type of composition which forms a striking contrast to the idyllic madrigals being composed about the same time.

Firenze composed his piece at about 1370 AD. The Caccia music is quoted by Edgerton, but mostly in a manner which only allows us to intimate the source, not recognize it outright. Both interests/influences complement and fructify each other to the extent that they give up their own single identities and become, actually generate, something else: Appose Messe: Caccia"
Instrumentation
Pipe organ
Recording
recording from a concert performance by Professor Gary Verkade at Carthage College in Kenosha
Score Details
Format - A4 / US Letter
Pages - 44
Similar Pieces
Hope of Dawn 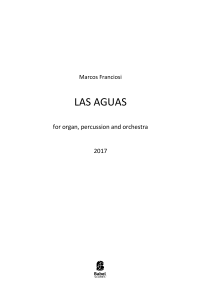 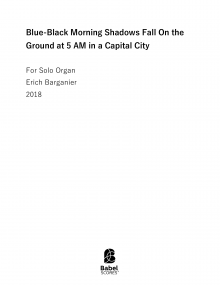