8,00 €
Printed format (+14,80 € printing and shipping). Colissimo5-11 days aprox.
Digital version (+0,00 €) instant download
When you buy a score, you can contact the composer right here!
Specifications
Region
Europe
Estimated Duration
11 - 15min
Date
2011
ISMN : 979-0-2325-0440-7
In Stock
Notes on this piece
Add to a playlist
Early Jamaica DJs, who picked up the samples for their sets from someone's else recordings, were among the first to see the future (even if never suspected it).

The future begins half a century later.

We are Generation Ctrl-C.

We live in the age of reproductive technologies in bloom.

We transmit information by making an infinite number of digital copies, which costs us practically nothing.

We download music and films from the internet, keep them in our gadgets, choose mobile phone by the number of Mpx in its camera or by number of compressed audio formats supported.

After all, we are the first generation in the history of mankind, for whom data copying is easy and natural as much as breathing.

The piece tries to project this situation onto some musical structures.

It is built almost totally on different forms of duplication.

There are various forms of repetitions (exact or modified) inside the piece's own material - and also some collage-like quotations, borrowing material from well-known sources.

The piece was commissioned by Alexey Shmurak (Ukraine).

The piece was performed in Russia and Ukraine by Alexey Shmurak, Olga Kirzina, Shaura Sagitova, Natalia Solovieva and author. 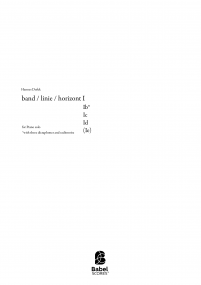