9,00 €
Printed format (+14,04 € printing and shipping). Colissimo5-11 days aprox.
Digital version (+0,00 €) instant download
Buy performance materials
When you buy a score, you can contact the composer right here!
Specifications
Region
Europe
Estimated Duration
11 - 15min
Date
2010
ISMN : 979-0-2325-0445-2
In Stock
Notes on this piece
Added to Favorite Pieces Add to Favorite Pieces
0
This piece was initially composed as a live soundtrack to the famous movie by Bunuel/Dali, but then detached from it and now linked to its origins by the title only.

Its material and overall sound are less defined by the film's irrational story, and more - by the attempt (I was fascinated with) to bring the aesthetics and structures of industrial techno into the world of contemporary academic music.

The piece combines the 'concrete instrumental music' approach with the ideas stolen from the works of experimental electronics' artists.

Tnink of it as a storyline - 'Lachenmann meets Pansonic', together they go visit Cage, Grisey and then go listen to Beardyman's live performance.

A bit surrealistic approach, which can be considered, after all, as a tribute to the above mentioned founders of the surrealistic movement.

The piece was commissioned by GAM-Ensemble (Russia), as a part of "Live Track" project.

Still was never performed in public.

Revised part of it appeared in 2015 under the name 'Half of a Dog' and was performed by Moscow Contemporary Music Ensemble several times in Russia. 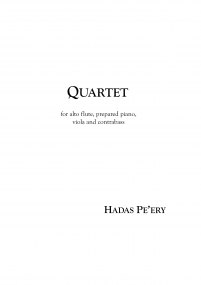