14,00 €
Printed format (+14,80 € printing and shipping). Colissimo7-14 days aprox.
Digital version (+0,00 €) instant download
Rent performance materials
When you buy a score, you can contact the composer right here!
Specifications
Region
Europe
Estimated Duration
11 - 15min
Date
2010
ISMN : 979-0-2325-0060-7
Notes on this piece
Add to a playlist
A fairly autobiographical title, if ever. Even psychological ? The musical rhythm, of course, but also the rhythms of Others, of other's life... Exploring the contrasts, the dialectics between melody and accompaniement, at a time when, more or less, all move away from it (credo of a fidelity to pitch organization ?). Different musical groups are attracting to each other, face, confront, then exclude from each other. A clarification process. I. "Attraction" : a common texture in which differents materials are attracted to each other, before acquiring their own autonomy. II. "Confrontation" : the groups break, split into a series of duets, punctuated by solo percussions. Exotism ? No. Just need of a shocking contrast. Presence of an Other, and attempt of inclusion.  III. "Exclusion" : coming back to the situation to which led the first movement : opposition (or dialectics ?) between melody and accompaniement. But sequels of the former confrontation. Then, an inextinguishable melody, an ineluctable slowing down, an inexpressible melancholy. Comprehending and including the Rhythm of Others, here is the harm of this century. Bar 400 : impossibility, therefore rupture.
Instrumentation
Trumpet|Trombone|Percussions|Piano|Violin|Viola |Cello
Recording
Musicians of the Conservatory of GenevaPremiered on May 21 2010. 8pt"
Score Details
Format - A4/ US Letter
Pages - 29
Similar Pieces 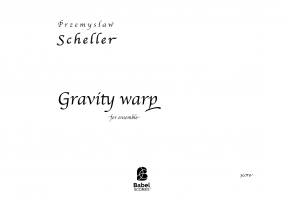 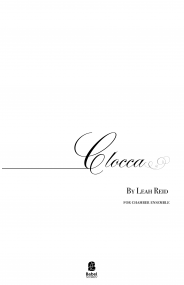