for six voices and sine waves

Silicone Skin and Fleshy Masses is built on an imaginary song that is sung by a machine entity that has been abandoned by its creator. Living through an ever-continuous process of corporal disintegration, the machine is left to witness its own decaying beauty and thus yearns for the healing touch of its maker. Although an original version of the song does not exist, this temporally stretched and fragmented reimagining of the music is meant to illustrate a moment in the machine’s perpetually deteriorating state.

This work is part of an ongoing endeavor of the composer to analyze the human voice and repurpose it within new, instrumental settings. Through this instrumental resynthesis, the composer intends to defamiliarize the original source material and capture a liminal zone in between what may be perceived as “human” and “non-human”. In Silicone Skin and Fleshy Masses, the instrumental constituents of the imagined voice are made of six actual human voices. The vocal performers, together with the accompanying sine waves, collectively constitute the voice of the fictional entity. Therefore, the ensemble is given a twofold role, which is to evoke the soulful singing of a seemingly sentient being, while simultaneously manifesting its uncanny nature. 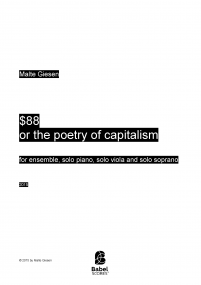 $88 or the poetry of capitalism
Malte Giesen 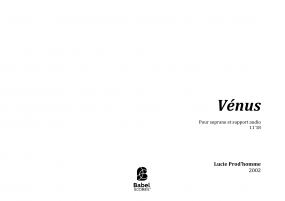