9,00 €
Printed format (+14,80 € printing and shipping). Colissimo7-14 days aprox.
Digital version (+0,00 €) instant download
Buy performance materials
When you buy a score, you can contact the composer right here!
Specifications
Region
Europe
Estimated Duration
1 - 5min
Date
2011
ISMN : 979-0-2325-1321-8
In Stock
Notes on this piece
Add to a playlist
Innen-Außen_Außerhalb (2011)
for oboe and live audio processes
dedicated to Nicolas Billaux
The title of the piece implies the three macro processes that take place in the piece. In the beginning, five different sound periods are played by the oboe and live recorded with a microphone by the computer program. The program with a time-stretching FFT algorithm repeats and time-stretches these five periods, while the oboist plays to supplementary materials, which are newly recorded. Thereafter, the program plays the previous and newer recordings, which are time-stretched more. The oboist plays again supplementary materials, which are again recorded. This process is repeated three more times (five times overall). At the end the first recording is extremely time-stretched (approximately five times). This process ("innen") is like a zoom-in process where the periods at the beginning sound very trivial and simple and at the end more complex and with many details.
The "Außen" process is made by exactly the same sound periods, but with the difference that the periods are long at the beginning and are gradually time-squeezed by the time-stretching FFT algorithm.
The last process "Außerhalb" is like a continuation of the previous process "Außen". The computer program repeats, and time-squeezes the recorded periods with random order until they are fused into a cloud-mass. The cloud-masses are controlled in time with lines (two for the transposition and two for the panorama), in between the program generates algorithmically random values. Various cloud-mass gestures follow until to the last point where the space between the lines is maximized. This process is considered as a transgression of the limits of the dipole "Innen-Außen".
Instrumentation
oboe|Real-time electronics|
Score Details
Format - A3 / tabloid
Pages - 22
Similar Pieces
Shore
Hans Tutschku
Customers Who Viewed This Piece Also Viewed: 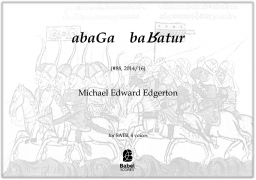