for bass-baritone and viola

Contemplations was created on Sound and Music's Embedded programme

as part of the Embedded: Radio 3's Composer in 3 project and premiered

Recorded by Ashley Riches and Sarah-Jane Bradley. First broadcast on 10

A performing score for the voice, with the viola part notated in treble clef

for easy reference, is available on request.

the Kafka Fragments for violin and soprano by György Kurtág.

for my BBC Residency. A true master of the musical miniature, somehow

Kurtág can summon entire worlds within the shortest spans. Indeed,

few words of text and last 30 seconds or less, yet each one somehow

achieves incredible profundity, and absolutely captures the wide range of

emotional and mental states found in the brief excerpts from Kafka's

writings that he uses.

The scoring of my piece, viola and bass-baritone, is intended as a kind of

darkened reflection of Kurtág's violin and soprano.The lower range of the

tone, to the music; the opportunity to work with one of the BBC's New

this unusual pairing, but as I began to choose the texts, all of which have

a rather brooding quality, it seemed somehow fitting.

In addition to my admiration for Kurtág, Kafka has also always been very

important to me too. Reading The Trial as a teenager was a life-changing

experience; it was perhaps my first real taste of the power of modern

much early twentieth century art does, and it was a pleasure to get to

know some of his lesser known writings in researching for this piece. 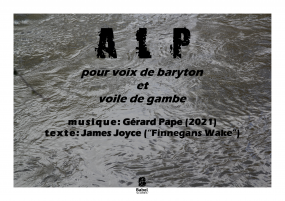