13,00 €
Printed format (+16,20 € printing and shipping). Colissimo5-11 days aprox.
Digital version (+0,00 €) instant download
Rent performance materials
When you buy a score, you can contact the composer right here!
Specifications
Region
Europe
Estimated Duration
1 - 5min
Date
2008
ISMN : 979-0-2325-0697-5
In Stock
Notes on this piece
Add to a playlist
Multiple mouths A single Mouth of many vocalitiesMouthssinging the vocal materialfreeing auralityexercising constant phonationMouth - Memory"the central actor of the drama" which is singing
"Bouches" (Mouths) is dedicated to the singer and performer Demétrio Stratos. It is a vocal cycle of four pieces: "Screams & Parasites", "Fragments d'une Berceuse Étirée", "Slow n'Low" and "Vocalism". The material of "Fragments d'une Berceuse Étirée"  (Fragments of An Extended Lullaby) comes from a popular french lullaby. The lullaby (extremely slowed down) is being sang by a voice masked with a small piece of paper. The voice is  also accompanied by prepared instruments with various kinds of mutes."Screams & Parasites" is composed by vocal interjections and quickly alternating phonations; they form an obstinate and accelerated rhythm leading to scream. The voice is accompanied by prepared-by-computer     instruments and by recorded screams of Avant-Rock vocalists who have deeply influenced my way of perceiving the voice (and its body): The Residents, Patti Smith, Captain Beefheart, Pink Floyd.In "Slow n'Low" the voice imitates the machine and the electroacoustic transformation of the recorded sound:extreme slow down and transposition, reverse, fragmentation. The instruments imitates the creaky voice (slow pulse of the vocal folds in very low register) and the electronics use this type of pulse on the tape.In "Vocalism" the voice recites in a rythmic and monotone way a list of words inspired by the homonymous poem of Walt Whitman.The voice uses multiple phonation types: sometimes "brut" vocalizations and sometimes adopts Demétrio Stratos' path or that of the oral traditions.The instrumental writing tends to be more towards the creation of unique sonic presences that co-exist, than obeying to an "orchestration" approach. Each sound of the score should be created, re-invented and perfectly mastered by the performer. It is a process of "oblivion" and of re-invention of the sound at its first instant, before gesture and before "knowledge".The use of electronics has two functions. The first is the transformation of sonic identity in terms of timbre, pitch, loudness, and density. The second is the transformation of temporality in terms of duration and rhythm. The electronic treatment (simple amplification, distortion, masking, over-scratch) serve above all to create multiple instrumental & vocal "identities" - sonic beings-in-metamorphosis, open to surprise and alterity. "Bouches" has been composed for the 2E2M Ensemble. "Bouches I" is a commission of La Muse En Circuit with the support of the French Ministry of Culture; "Bouches II" is a commission of French Radio and has been worked at the GRM studios.
Georgia Spiropoulos 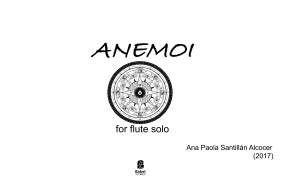