Cristina Papi graduated cum laude in Modern Literature at the University of Siena, she studied in Paris and at the University of Edinburgh. In 2018 he obtained a PhD in Research and Creation at the University of Paris 8 under the guidance of A.Sedes on the AlchyMia project for glass, electronics and performer. He completed his studies in Piano, Didactics of Music and in Composition at the Conservatory of Music "L.Cherubini" in Florence with the Masters G.Barsotti, G.Cardini, M.Cardi, L.Morciano. Having specialized in piano and composition, she attended seminars and courses with P.N. Masi, G.Cardini, B.Canino, G.Chiari, A. Solbiati, S.Gervasoni, Luis de Pablo, T.Hosokawa, R.Mirigliano, F. Filidei, E. Lopez Lopez, M.Stroppa and the Biennale di Venezia Musica. Selected for international residencies and competitions such as Kate di Tempo Reale, Crespina Art, Festival delle Performance Milano, her works are performed in Italy and abroad including Paris MSH, Festival Pontino, Freon Ensemble, 2E2M Ensemble, ATM Ensemble , Teatro Studio Sperimentale, Bruno Lisi Gallery, GAMO, New Made Ensemble, "L. Cherubini" Orchestra, Pontino Festival and the “5 Days of Milan” Festival. He attended the Synapsis International School of Comparative Studies and Literature of the University of Siena and the courses of Higher Musical Perfection in Sermoneta and at the Conservatory of Tours under the guidance of Maestro A. Solbiati. The artistic activity ranges from compositions, musical scenes, sound installations, video installations, mix media, performances and site-specific sound projects. Since 2020 he has been teaching at the “A.Boito” Conservatory of Music in Parma. His works are published on Babel Score Contemporary Music Library. She lives in Paris. 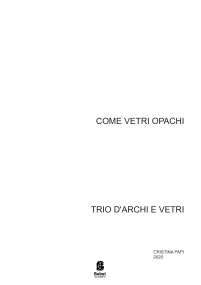