17,00 €
Versión impresa (+16,20 € impresión y envío). Colissimo5-11 days aprox.
Versión digital (+0,00 €) para descarga
Alquilar el material para una representación pública
Al comprar una partitura, usted puede contactar al compositor aquí mismo!
Especificaciones
Region
Asia
Estimated Duration
1 - 5min
Date
2011
ISMN : 979-0-2325-0379-0
In Stock
Descripción
Add to list
The piece was written during the spring and summer of 2005.It is all written in a mode (3-3-2-1-2, for example: F#-A-C-D-Eb-F), that was originally derived from the piece's main theme. This theme can be heard clearly in the oboes parts starting at mm. 20.This mode is used quite strictly throughout the piece and unifies it in its special color. The work is divided into six episodes; each one has its own structure and climax, and together they form the overall structure. The different episodes are linked by various thematic and sonoric materials, as well as the mentioned above mode. The first episode is a dense exposition-like section with three layers:The first is the energetic material that is heard right at the opening bars, and it decays gradually and in a few waves throughout the episode. The second layer is heard in the oboes heterophonic parts, presenting the main theme of the piece. The third layer is played by the violins, and actually it presents already the second episode's material.A second tutti interruption is the starting point for the second episode that has a dreamy and tranquil atmosphere. This music justifies more then any other the piece's name – white darkness. I have an image of crystal like mobile of sounds turning round and round and until it collapses. A single note (G) is slowly emerging from the static music and soon it "takes over" the whole orchestra. Through a dramatic gesture of a slow glissando, the note transforms and becomes the accompaniment ostinato figure of the next episode. The third episode is in a crooked dance-like section, with various ostinato figures in several sections of the orchestra. The two horns are now soloists, parallel to the two oboes of the first episode.The fourth episode begins with a struggle between the two bassoons (again, paralleling the oboes), and the low strings. Eventually it fades and a polyphonic section for seven soloists (developing the main theme) evolves. This is brutally cut by the first chord of the fifth episodhe. Here the material of the first layer of the first episode comes back and develops to a big climax. In this climax, a variation of the main theme is played by the bassoons, horns and contrabasses, while the rest of the instruments play rapid passages, each one in a different transposition of the mode, so that all 12-tones are heard simultaneously. After the climax, comes a diminuendo which presents some of the materials from previous sections of the piece. The very low point of this dim. is the contrabasses solo. This is the last of the duet series which started up with the oboes, and went down through the horns in the third episode, the bassoons in the beginning of the fourth, to this moment at the very bottom of the orchestral range. The sixth episode is a coda. In it one can find the oboes theme (first episode) as well as a parody on the big climax that was just heard (fifth episode), and also material from the second and third episodes. It is all wrapped up by the ostinato in the violins. This is something I like to do sometimes when ending a piece – looking at it, or rather, listening to it, from a different perspective. It is as though a different composer was writing music using the same motives. I think it is complementary music for the piece, because it contradicts it. Funny, this was actually the first sketch to survive the long way from the sketch book to the score. It was clearly a coda right from its beginning; I just didn't know what piece it was supposed to conclude.
Instrumentation
Flute/Piccolo
Oboes (2)
Bassoons (2)
Horns in F (2)
Glokenspiel (to be played by the fourth viola player)
Violins (11)
Violas (4)
Cello (4)
Double Basses (2) 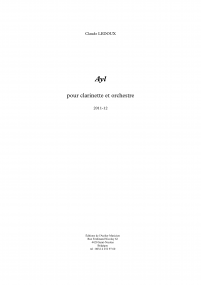