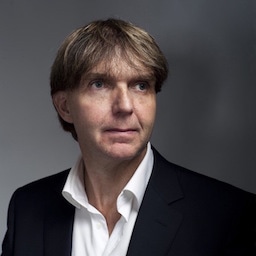 Play all audio recordings
Willem Jeths' compositions present a highly individual reaction to music tradition. Jeths has composed chamber and orchestral music (including solo concertos), songs and an opera, initially in an atonal idiom, but later flirting with traditional tonality. He draws on the past and attempts to enrich it through experimentation: “It is precisely by taking tradition as a starting point that it becomes possible to explore new paths.” Of the musical parameters, he devotes the greatest attention to tone colour – “Colour is the theme of all my works.” He meticulously works out timbral effects, often calling for playing techniques unused in the West – or even elsewhere – and creatively incorporating uncommon sound sources: toy instruments, breaking glass, dripping water. That seems more subtle than it sometimes sounds, for subtlety and beauty are not always his goal – showing the extremes is more important. “My music is about extremes: strict purity versus distortion, loud against soft.” For example, he lets a beautiful violin tone fade into scratching, and in his Bandoneon Concerto, the solo instrument instead of being tango-like, sounds at times like “a worn-out dog”. While his music is rich in tone colour, Jeths is frugal with his musical material. He limits himself to a few motifs and presents them from varying perspectives until they are (as his composition teacher Tristan Keuris would say) “run down”.
Piezas ordenadas por año. Los trabajos mas recientes aparecen primero