Play all audio recordings
Christian Baldini, composer and conductor, was born in Argentina in 1978, and has resided in the US since 2003. His compositions have been presented in four continents, commissioned by and performed by numerous orchestras and ensembles including the Munich Radio Orchestra, Memphis Symphony Orchestra (US), Southbank Sinfonia (London), Orchestre National de Lorraine (France), New York New Music Ensemble, Chronophonie Ensemble (Freiburg), International Ensemble Modern Academy (Frankfurt), Daegu Chamber Orchestra (South Korea) and the Israel Contemporary Players. He was a featured composer at the Ginastera Festival in London (2006) and at the Acanthes Festival in Metz, France (2008). He made his conducting debut in Salzburg in 2012 after an international jury invited him to perform at the Awards Weekend of the Nestlé/Salzburg Festival Young Conductors Award, out of 91 submissions worldwide. As a conductor he has worked with many orchestras and ensembles internationally, and has also been active in the opera field, most recently conducting Bartok’s Bluebeard’s Castle and Britten’s The Rape of Lucretia. He has worked internationally conducting the Buenos Aires Philharmonic, Scottish Chamber Orchestra, BBC Symphony Orchestra, Munich Radio Orchestra, National Symphony Orchestra (of Portugal, Argentina and the US), South African National Youth Orchestra, Aldeburgh Festival (England), San Francisco Contemporary Music Players and the Plural Ensemble (Spain). He was educated at the State University of New York at Buffalo (Ph.D. in composition), as well as the Pennsylvania State University (Master's in conducting), following up initial studies at the Catholic University of Argentina (B.Mus). His mentors and teachers have included Martyn Brabbins, Leonard Slatkin, David Felder, Marta Lambertini, Julio Viera, Gerardo Edelstein, Guillermo Scarabino and Sian Edwards. In addition, he has participated in masterclasses with Brian Ferneyhough, Peter Eötvös, Michele Reverdy and Salvatore Sciarrino. Currently, Baldini is a Professor of Music at the University of California, Davis. He serves as the artistic director and principal conductor of the UC Davis Symphony Orchestra, as well as the Camellia Symphony Orchestra in Sacramento. In 2014, Baldini returns for engagements with the BBC Symphony Orchestra, makes his opera conducting debut at Teatro Colón (world première of Oscar Strasnoy's Requiem for a Nun), and with Chile's National Chamber Orchestra. Baldini recorded a CD of Mozart Arias and Overtures with the Scottish Chamber Orchestra, which will be released on Linn records in 2014. For more information, visit www.christianbaldini.info
Tri par année. Les pièces les plus recentes apparaissent d'abord 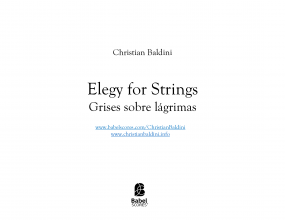