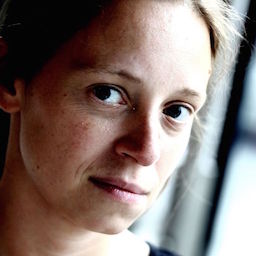 Play all audio recordings
Joanna Wozny was born in the Polish city of Zabrze in 1973. She earned a master’s degree in philosophy studying from 1992 to 1999 in Katowice, Poland. In 1996 she also commenced studies in composition and music theory at the University of Music and Performing Arts Graz with Gerd Kühr and Beat Furrer, from which she graduated with honours in 2003. During the 2002/2003 academic year, Wozny also received composing instruction from Younghi Pagh- Paan. Joanna Wozny lives as a freelance composer in Graz.
As a composer, Joanna Wozny has received numerous awards and honours including a grant from the Stefan Batory Foundation (Warsaw) in 1997, an Advancement Award for Music from the City of Graz in 2001, the Austrian State Scholarship for Composers in 2005 and 2008, the Andrzej Dobrowolski Composition Scholarship of 2008, the Erste Bank Composing Commission of 2010 and the SKE Publicity Award of 2010. In 2003 and 2004, she was invited to be Composer in Residence at the Artists Encounter of St. Lambrecht’s Abbey, in 2010/11 she was the Young Composer in Residence of the ensemble PHACE | CONTEMPORARY MUSIC, and in 2011 she was Composer in Residence at the venue Art Station St. Peter in Cologne. Wozny’s oeuvre encompasses the entire spectrum of instrumental music – from solo and chamber music works to ensemble and orchestra compositions, as well as choral and other vocal works and electronic music. She has written works commissioned by the Cultural Centre of the Minorites in Graz, the ORF, the Munich Radio Orchestra, the Klangspuren Festival of Contemporary Music in Schwaz, Vienna Mozart Year 2006, Warsaw Autumn and the Musikprotokoll concert series in Graz. Her compositions have been featured at numerous major festivals including Wien Modern, Musikprotokoll Graz, Ultraschall Festival Berlin, Warsaw Autumn, Forum Neuer Musik in Cologne and Eclat Festival Stuttgart. Ensembles performing her works have included the Vienna Radio Symphony Orchestra, the Munich Radio Orchestra, Klangforum Wien, Ensemble Wiener Collage, PercussioNova, ensemble courage, PHACE, the EWCM and Ensemble Mosaik.
Photo copyright: J.J. Kucek
Tri par année. Les pièces les plus recentes apparaissent d'abord