14,00 €
Version papier (+14,80 € impression et livraison ). Colissimo7-14 days aprox.
Version numérique (+0,00 €) à télécharger
Louer le matériel pour les exécutions publiques
Chez BabelScores, quand vous achetez une partition, vous pouvez ensuite contacter directement le compositeur ici même !
Caractéristiques
Region
Europe
Estimated Duration
6 - 10min
Date
2008
ISMN : 979-0-2325-0990-7
In Stock
Notes sur cette pièce
Ajouter à une playlist
“Colors (Sounds) are not used because they are true to nature but because they are necessary to the particular picture (composition)” Kandinsky, W - parenthesis by author
Morphallaxis is a commission by Ircam premiered in 2008 by the ensemble Alternance in Paris. The title of the piece means recreation/ rebirth of a part from a part. It refers to an ongoing model of macro and micro structure which always is rebirth from its own again and again.
The three instrumental sound stream as well as the electronics functions as a single meta-instrument. Each instrumental timbre technique is carefully adjusted to properly fuse or segregate from the holophonic musical texture.
The instrumental part of Morphallaxis is compiled out of 700 hundred sound samples that are previously performed by musicians of the ensemble Alternance and recorded at Ircam studios in Paris. The produced sound library has been analyzed and classified by a computer system implemented on MaxMSP. The analysis and classification of a large amount of sound files according to their timbre characteristics plays a catalytic role in the compositional process. It provides the necessary data to create sound scales based on timbre similarities of the sounds in question.
The fixed electronics part, is an amalgam of concrete and synthesized sounds, instrumental and abstract sounds which along with their references and their semiotics aim to create a rich sonic experience.
The live electronics add to the possibilities and bridges the preprocessed musical part with those of the instrumental parts. The computer becomes one more member of the ensemble and contributes to the final outcome. It follows, collects, analyses, remembers, classifies to what the others do. It can make its own decisions and interact expressively with his “colleagues” having its own certain sound qualities, possibilities and limitations.
This piece was awarded an Honorable Mention at the Bourges - 35e Concours International de Musique et d’Art Sonore Electroacoustiques in France. 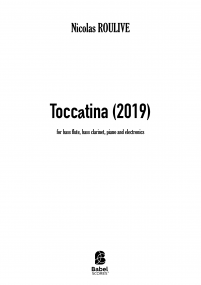 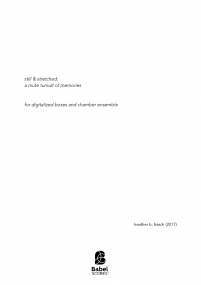