12,00 €
Version papier (+14,04 € impression et livraison ). Colissimo5-11 days aprox.
Version numérique (+0,00 €) à télécharger
Louer le matériel pour les exécutions publiques
Chez BabelScores, quand vous achetez une partition, vous pouvez ensuite contacter directement le compositeur ici même !
Caractéristiques
Region
Europe
Estimated Duration
6 - 10min
Date
2002
ISMN : 979-0-2325-0915-0
In Stock
Notes sur cette pièce
Ajouter à une playlist
For Hermann Markus is written as a memorial piece to Hermann Markus Pressl, my firstcomposition teacher, who died in 1994. The lyrical incantations of the mezzo-soprano are meant to capture the celebratory nature of the work. The physical location of each of the three quintets is as follows: strings front and rear; woodwinds along the sides; percussion and brass at the corners of the stage. The mezzo-soprano is placed behind the audience and hidden from view. The layout does not merely suggest a theatrical element; instead, the focus on an unconventional spatial placement of performers enables a diffuse mix of sounds.
In the past years I have composed a series of pieces based on an empirical compositional approach in an attempt to pursue "what the Greeks did not know: uncertainty." I wanted to put aside the convenience that systems, methodologies and theories provide to a composer, although I still think that they are useful exercises for the mind. For the act of composing, however, infinite time, empty space, twelve notes (more or less), memory, and desire should be more than enough. For Hermann Markus is a similar attempt on a large scale. Those who are familiar with my music will recognize the use of repetitive patterns, faint occasional notes and temporal accents in an empty space, textural variations on one note, the abnegation of thematic/motivic elaboration, and layers of textural streams. To those I added some other features: events are occasionally called forth and dissolve in an instant and abrupt positions within the narrative of the work.

A central aspect of the deepest structural layer of the work is the manipulation of a sonority I label the “Adelma Chord,” a sonority which, in fact, appears in many of my compositions. The chord comprises in ascending order: a semitone; two augmented fourths; and another semitone (b, c, f sharp, b sharp, c sharp). It is symmetrical sonority around the axis pitch f sharp. The chord governs the organization of the tonal centers in a macro-structural sense: c sharp (from the beginning—4’08”); f sharp (8’10”—11’00”); b and c (14’00”—to the end).A fundamental premise of the composition involves an essential contradiction between forward motion and stasis. The work exhibits an evolving stream of musical ideas, wherein the instrumental forces are variously divided and subdivided. And yet, repetitive patterns organize the discrete moments that comprise the larger whole, creating points of repose, which, at times, inhibits forward motion, resulting in the impression of a total cessation of movement.
Facebook LinkedIn Reddit Twitter 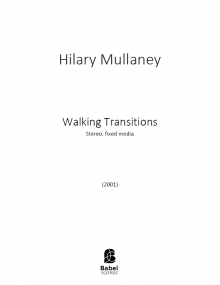