11,00 €
Version papier (+16,20 € impression et livraison ). Colissimo5-11 days aprox.
Version numérique (+0,00 €) à télécharger
Louer le matériel pour les exécutions publiques
Chez BabelScores, quand vous achetez une partition, vous pouvez ensuite contacter directement le compositeur ici même !
Caractéristiques
Region
Asia
Estimated Duration
11 - 15min
Date
2005
ISMN : 979-0-2325-1165-8
In Stock
Notes sur cette pièce
Ajouter à une playlist
Yuhas’s piece continues the trend of “emancipating” the human voice, as evidenced in vocal works from the second half of the 20th century, by exploring the vocal ensemble’s integration into the instrumental texture. The composer employs a phonetic text that, like Dadaist texts, has no semantic meaning. Although an Indian mantra appears in the piece’s main section, it is also meant to be considered an incantation of meaningless syllables. A great deal of attention is devoted to the melded effect of the vocal sounds and the manner of producing them. The voices consequently function like another instrument, as one of the instrumental groups in the overall ensemble. Layers of resonant “color” are painstakingly laid upon each other, creating a rich polyphonic texture, the general effect of which leans toward heterophony. This layering is especially fitting for the supernatural-ritualistic atmosphere, which the composer intentionally restricts through a distanced, somewhat ironic, view: a role apparently filled by the allusions to popular music popping up here and there throughout the piece. Only in the final section, at the height of the instrumental tumult, are the voices heard singing in the “traditional” sense, in a kind of quiet chorale, albeit with the instruments still trying to cut them off. Two notes stand out against the background of the voices singing at the end of the piece: “A” by a glockenspiel and “G” by a contrabass, played pizzicato. Both notes appeared before at the beginning of the piece, when out of the unison of the “A,” the soprano bursts out singing an “A-G” seventh. Like in his other works, here as well we can see the subtle, sophisticated spinning of motifs (part of the composition process that the listener generally perceives only subconsciously!). Atonal harmony forms the base for the motif development in this composition, as in the composer’s other pieces. And, as always, delicate tonal hints are interwoven this time as well. “Spell” was commissioned by the Neue Vocalsolisten, which will also be performing it this year in Stuttgart. Yossi Peles 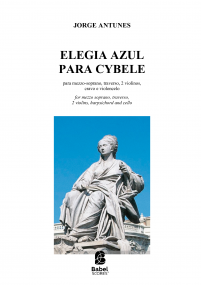 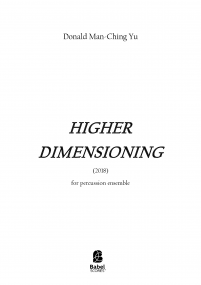