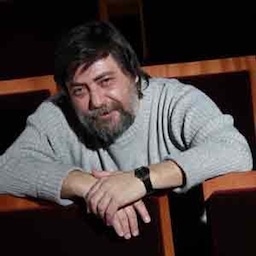 Play all audio recordings
Uzbek composer of mostly stage, orchestral, chamber, vocal, and piano works that have been performed in the Americas, Asia and Europe.
Mr. Yanov-Yanovsky studied composition and instrumentation with his father Felix Yanov-Yanovsky at the State Conservatory of Uzbekistan in Tashkent, where he graduated in 1986. He attended masterclasses with Edison Denisov and Poul Ruders in Denmark in 1992 and attended IRCAM in Paris in 1993.
Among his honours are Deuxième Prix in the competition for sacred music in Fribourg (1991, for Lacrymosa), First Prize in the competition of the ensemble ALEA III in Boston, Massachusetts (1992, for Presentiment), the Prix Spécial de Nantes at the Festival International du Film de Cannes (1992, for Kammie [film score]), and the Prize of the Cinematographers' Union of Uzbekistan (1995, for The History of Islām, shared with Felix Yanov-Yanovsky [score for a series of animated films]). His music has been performed in Austria, Croatia, the Czech Republic, Denmark, France, Germany, Italy, Mexico, Poland, Russia, Sweden, the USA, and Uzbekistan, including two portrait concerts in Italy (1999).
He is also active in other positions. He founded the annual festival for contemporary music Ilkhom-XX in Tashkent in 1996 and served as its artistic director from 1996–2006. He later served as composer-in-residence at the Siemens Foundation/Hearing Instruments Factory in New Jersey in 2002 and at Harvard University from 2008–10.
In addition to the works listed below, he has composed scores for more than 50 films and more than 25 stage productions.
Tri par année. Les pièces les plus recentes apparaissent d'abord