9,79 €
Version papier (+14,80 € impression et livraison ). Colissimo7-14 days aprox.
Version numérique (+0,00 €) à télécharger
Louer le matériel pour les exécutions publiques
Chez BabelScores, quand vous achetez une partition, vous pouvez ensuite contacter directement le compositeur ici même !
Caractéristiques
Region
Europe
Estimated Duration
6 - 10min
Date
2014
ISMN : 979-0-2325-1506-9
Vidéos
Notes sur cette pièce
Ajouter à une playlist
Das Ende eines Wintermärchens
Das Ende eines Wintermärchens (The End of a Winter's Tale) takes its title from the third part of Hans-Jürgen Sybergergs mega-film “ein Film aus Deutschland” (1977).The film that has no clear plot or chronology , instead, each part explores one particular topic with the third part exploring the holocaust and the ideology behind it.Rather than devise a spectacle in the past tense, by attempting to simulate unrepeatable reality or showing a photographic document, this is a sort of spectacle in the present tense – “adventures in the head”. Reality can only be grasped indirectly – seen reflected in a mirror, staged in the theater of the mind. The music should however not be misinterpreted as crudely illustrative, some (more or less) musical (symbolic) references are made; like beginning and closing all parts with a silent lonely child, an ironic mock of the complexity of the subject presented as something simple and also evoking symbolism of melancholy which musically is referred to by the, seemingly simple, beginning and ending on one note (G and E respectively). This also acts as a dramatic form of the piece, building an arc from simplicity – complexity – simplicity in its use of material.Maybe this music could be viewed upon as “abstract storytelling”, having no real “plot” but constantly shifting its focus with different gestures, states, and reflections and so on. As said above, there is a certain dramatic form with a building of material starting with roughly-accented contrabass harmonics, culminating with the strings + clarinet playing ordered, layered, almost mechanical music (with each instrument “going through” the 24 quartertones of an octave in its own sequence and with very exactly defined crescendos and diminuendos), eventually differentiating into more complex and tangled textures. The music now tries to focus, with a decrease of the harmonic and melodic material but is once again drawn to a scale using all 24 quartertones in the octave, but this time used as harmonic material with crescendos, becoming ever shorter and louder. A shift of focus utilizing multiple gestures and states (like looking at the material at different perspectives) the music finally stabilize more and more until a single E in violin Is left… seemingly simple but constantly fluctuating in its inner structure.Das Ende eines Wintermärchens is the third part in cycle I from the work “synthetic fragments” (work in progress at the time of this writing), where cycle I consists of 4 parts, all named after the parts from Syberbergs film; I – Der gral, II – Ein deutcher traum, III – Das Ende eines Wintermärchens, IV – Wir Kinder der Hölle; A grail, a dream, a tail. Hell. Das Ende eines Wintermärchens was commissioned by Ensemble Aleph.Dealing with the fascination of Nazism/Fascism, once again starting to grow in the western world, the work itself is truly an antithesis of a Nazi “artwork”; trying to be individual, complex, multidimensional and invite to reflection it would probably be proscribed as “decadent art”.
Instrumentation
Clarinet|Percussions|Piano|Violin|Viola |Cello|Double bass
Recording
Ensemble Aleph
Score Details
Format - A3 / tabloid
Pages - 24
Pièces similaires
Do Bats eat Cats? 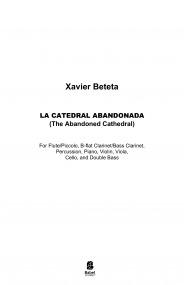 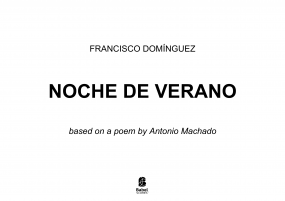