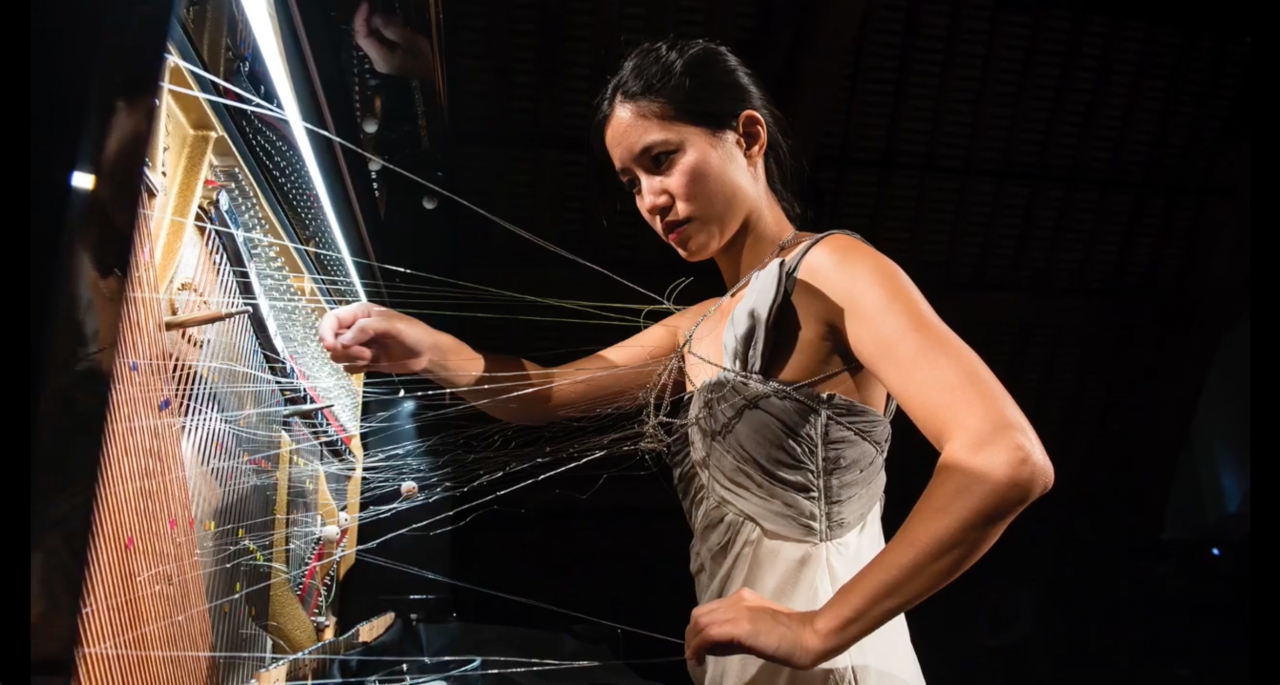 "String-Piano" was the term coined for the preparation of the instrument for this piece. It is made of many nylon strings attached to the costume of the player and to the strings of the upright piano.

The pianist wears latex gloves to produce sounds rubbing the nylon strings in different ways. The goal here is to explore new forms of relationships between the pianist and her instrument, taking away the hammers, which normally mediate the interaction between fingers and strings, using instead more direct action on the string, through the gestures and body of the player. As a result, the control of the resulting sound is flexible and unstable, giving an interesting relationship between movement and expressiveness of the pianist. Huihui Cheng, as a composer and performance designer, is currently interested in experiments about ”performance and costume”. In several of her recent pieces, costumes take an important place in the musical performance, thus exploring domain encompassing music, sound objects and performance, with an emphasis on the theatrical representation of the performer.

Messenger is a piece for upright piano solo, premiered by pianist Claudia Chan in 2017. During that time I was interested in making costume as extended instrument for the performers. n this piece, the idea was to experiment with an upright piano being a part of the costume of the pianist. So that they are both linked together.

This idea came from another piece of mine, for voice and electronics, composed the year before, called Me Du ça. In that piece, I used plastic pipes as sound objects, which later became the wig of the singer, simulating the figure of a Me du ça, also a visual element increasing the theatrical impact of the music.

I decided to turn the piano to be a part of the costume of the pianist, or the costume is a part of the piano, they will both linked together. For this reason, I decided to choose upright piano. because the strings are vertical, it is interesting to play the strings as it is a harp. and the audience could see all the secret of the prepared piano sounds…what they usually couldn’t see by a concert piano. with this idea, I did this preparation, which I call it String-Piano, upright piano without hammer, with nylon strings attached to the strings of the piano and pianist will be connected to the piano through the costume.

The gesture of playing this string piano is quite special, the pianist and the piano seem to melt into each other, and the pianist need to first find the way to able to drive this piano rather than play as usual.
thanks for Claudia Chan, she did a wonderful interpretation, we worked during several days at Royaumont, and I was so glad that she was very open with experiments and she did precisely everything what has been written just after 4 days meeting time with this new instrument. She was a great "messenger".

"A dress and a self made costume, nylon strings and piano strings all linked together, rubbing and pulling the strings, the sounds are through physical gestures. This is a strong image, Pianist Claudia Chan - like a puppeteer- addresses the individual piano strings through finely differentiated pulling on the strings. This is certainly - beyond the audible aspects - a visually exciting effect. Fortunately, Huihui Cheng didn’t only set-up a installation, but rather, composed a densely crafted piece in which the technical spectrum is further expanded by other possibilities" — Martin Tchiba