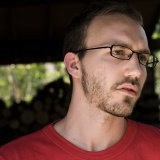 Play all audio recordings
David Coll, a versatile, young San Francisco-based composer, has written music for various disciplines, from concert hall to theatre and dance to interactive installations. He has studied at the University of Illinois and IRCAM in Paris, and is currently a Ph.D. candidate at the University of California-Berkeley. His work is slowly gaining exposure in Europe with performances at festivals such as the World Music Days/Gaida Festival, Gaudeamus Music Week, Voix Nouvelles (Abbaye de Royaumont), as well as with collaborations with musicians such as cellist Severine Ballon, soprano Donatienne Michel-Dansac, baritone Lionel Peintre, and pianist Sebastian Berweck. In the San Francisco Bay Area, David is composer in residence with the Berkeley Symphony (Under Construction Series) for the 2010-2011 season.
Through ongoing emphasis with notational, visual, and technological issues, his works create situations that investigate the physical presence of performers onstage. Through this investigation, sounds, interaction, motion, all are considered as material, and the results vary between what might be considered wholly music, theatre, or some mix of the two.
David studies primarily with Edmund Campion and Erk Ulman, and has participated in master classes with composers Chaya Czernowin, Steven Takasugi, Brian Ferneyhough, Alvin Curran, and Philippe Leroux.
Ordered by year. Most recent works appears first 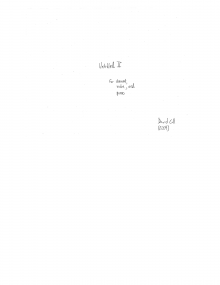 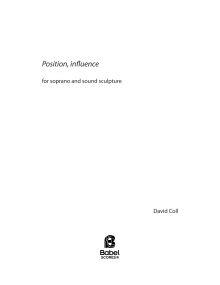