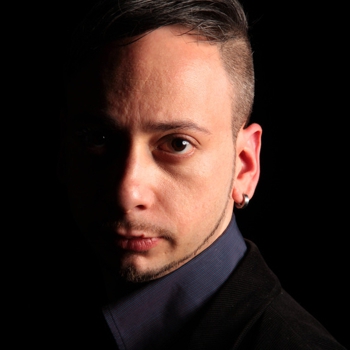 Play all audio recordings
Maurilio Cacciatore’s music stems out from a  combination of acoustic instruments with tools for digital music. It also incorporates electromechanical objects and uses various resources of informatics.
It results in a complex, multi-layered texture, presenting on the surface classical instruments and electronics, while containing an inner core of hybrid and non conventional techniques.
Beyond the conventional standard of spatialization, Maurilio Cacciatore’s loudspeaker setups explore non-coded solutions that integrate hardware and software within various musical contents.
The theatrical dimension of his works tends to integrate visual aspects and music into the score, seeking an improvement of communication among the players on stage.He was student of Fabio Cifariello Ciardi and Ivan Fedele, always obtaining the highest marks in Italy, Sweden and France. He was awarded a Ph.D. cum laude in Science and Technology of the Arts Catholic University of Porto (tutored by Erik Oña) - Philippe Manoury, head of the examine committee.He has been composer in residence at the Studios of the Ircam, the ZKM, the Muse en Circuit of Paris and the Elektronisches Studio Basel.
He is professor of Electroacoustic Composition at the Conservatory of Castelfranco Veneto (Italy).
He held lectures and masterclasses on his music at the Saint Martin University of Buenos Aires and since 2017 he is guest professor at the Conservatory Musiarte of Maputo (Mozambique).
In 2010 he was awarded the “Premio Petrassi” of the Italian Republic Presidency. In 2012 he won first prize at the International Composition Competition “Premio Città di Trieste”. In 2016 he represented Italy at the Rostrum of Composers. In 2017 he was awarded the “Produktion Preis” at the Giga-Hertz Award of the ZKM Karlsruhe.
He has been performed by first class ensemble and Institutions such as: Philharmonic Orchestra of Radio France, National Orchestra of Lorrain, Orchestra of I Pomeriggi Musicali of Milano, the Ensemble Intercontemporain, Hanatsu miroir, Linea, Proxima Centauri, Kammerorchester Basel, Phoenix Basel, Aleph, L’arsenale, Algoritmo, Sentieri Selvaggi, Contempoartensemble, Accroche Note, Choir Le Cris de Paris, Voix de Strass.
His music is published by Edizioni Suvini Zerboni, Milan.
Maurilio is artistic coordinator of the Syntax Ensemble and tutor at the CIMM (Centro Informatico Musicale Multimediale) of the Biennale of Venice -.
Ordered by year. Most recent works appears first