12,00 €
Printed format (+14,04 € printing and shipping). Colissimo5-11 days aprox.
Digital version (+0,00 €) instant download
Buy performance materials
When you buy a score, you can contact the composer right here!
Specifications
Region
Europe
Estimated Duration
6 - 10min
Date
2009
ISMN : 979-0-2325-0538-1
In Stock
Notes on this piece
Add to a playlist
True Story was composed for the festival The Process, organized by the Electronic Music Laboratory of Lithuania, included in the program of Vilnius, the Capital of Culture 2009. It was premiered on 20th September 2009 at the Vilnius Energy Museum by Peter J.A. van Bergen of LOOS Ensemble. The electronic part was developed in the studios of la Maison de Science de l’Homme, of the University of Paris VIII and in the studios of the Lithuanian Composers Union, in Vilnius. The saxophone part was developed in collaboration with Pedro Bittencourt. A new version was developed with Pedro Bittencourt and it was premiered at ZKM, Karlsruhe on 26th February 2010. The IdeasThere are two preliminary ideas in the basis of the conception of this work: first, the inspiring ‘force’ of Charles Mingus’ Moanin’ and second, the dipole of existence-inexistence, or order-chaos. More importantly, the work was conceived and developed in the context of the interdisciplinary scientific field of Systemics.In the perspective of the dipole existence-inexistence, order-chaos, the electronic part represents chaos and inexistence while the saxophonist represents order and existence. While the sound activity of the saxophonist is emerging – while its instrumental sound starts to exist – it provokes something it cannot control directly, something chaotic: the electronic sound.  The work is the result of the interaction between these two elements, a kind of oscillation between the two poles of this dipole. The RealisationThe construction of the electronic part was based on a self-organised system written in MAX/MSP. The system is the result of a complex network of delay lines, which can individually change their parameters according to their perception of the environment and their settings. This is possible through a live perceptual analysis of the sound environment. Notably, there is no other sound processing than the result of the system’s self-regulating processes. All system’s processes are observed and controlled by the system’s ability of sound’s control feedback.Consequently, the sound material derives from two types of the system’s use: as a ‘closed system’ (a system of controlled conditions) and as an ‘open system’, (the way all living organisms behave). In the second case, as the system is ‘open’, it can perceive its external environment and consequently it can be influenced by this environment. This is used mainly for the low sounds deriving from a filtered perception of the systems external environment, which in this case is the acoustic space of the studio. In the first case, i.e. using a ‘closed system’, the system does not perceive its external environment and therefore it is unable to perceive the result of its internal process and change it accordingly. For that reason, the result depends on the internal nonlinear interactions between the systems elements using material from a tenor saxophone.
Facebook LinkedIn Reddit Tumblr Twitter Pinterest 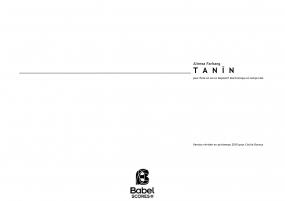