for ensemble and live electronics

In this sense in some sections of the work the acoustic instruments serve as the model for creating the electronic part, and in other sections it is the electronic concept and synthesis algorithms that serve as models for the instrumental writing.

As for the electronic writing, two approaches have been made: one in real time and another one in differed time, although during performance both happen from the same computer, using a Max patch. Yet in both cases (in the case of true real-time or in the case of precomposed and synthesized electronic fragments) the idea of going back and forth between the two sonic worlds (acoustic and electronic), remains the central concept of the piece.

This piece was commissioned by Casa da M?sica and composed in 2001 for the Ensemble Recherche, which gave its first performance at the M?sica Viva Festival 2001, under the direction of Johannes Kalitzke. 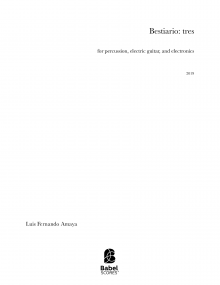