Play all audio recordings
Per Bloland is a composer of acoustic and electroacoustic music whose works have been praised by the New York Times as “lush, caustic,” and “irresistible.” His compositions range from short intimate solo pieces to works for large orchestra, incorporate video, dance, and custom electronics, and often draw on a variety of other art forms. He is interested particularly in the intersections between literature and music, especially regarding issues of modernity in both disciplines.
Bloland has received awards and recognition from organizations including IRCAM, ICMA, SEAMUS/ASCAP, the Ohio Arts Council, Digital Art Awards of Tokyo, the Martirano Competition, ISCM, the Eastman Computer Music Center, SCI/ASCAP, the Dal Niente Composer Competition, Taukay Edizioni Musicali, and the Accademia Musicale Pescarese. His first opera, Pedr Solis, commissioned and premiered by Guerilla Opera in 2015, received rave reviews from the Boston Globe and the Boston Classical Review. In 2013 his work was selected for performance at the International Society for Contemporary Music (ISCM) World New Music Days in Slovakia. He has received commissions from Ensemble Échappé, Unheard-of//Ensemble, loadbang, Keith Kirchoff, Wild Rumpus, the Ecce Ensemble, Ensemble Pi, the Callithumpian Consort, Stanford’s CCRMA, SEAMUS/ASCAP, the Kenners, Michael Straus and Patti Cudd. His music can be heard on the TauKay (Italy), Capstone, Spektral, and SEAMUS labels, on the 2015 ICMC DVD, and through the MIT Press. A portrait CD of his work, titled Chamber Industrial and performed by Ecce Ensemble, is available on Tzadik.
Performers of Bloland’s music include Guerilla Opera, the Berkeley Symphony Orchestra, Talea Ensemble, the International Contemporary Ensemble (ICE), the Quasars Ensemble (Slovakia), Bent Frequency, Insomnio, the Callithumpian Consort, Linea Ensemble, Ecce Ensemble, newEar, sfSound, Ensemble Moto Perpetuo, the Worn Chamber Ensemble, the Stanford Symphony Orchestra, Taka Kigawa, Elliot Gattegno, Keith Kirchoff, Bill Solomon, Patti Cudd, Margaret Lancaster, Sebastian Berweck, John Sampen, and Marianne Gythfeldt. His music has been performed at Bourges, Darmstadt, ICMC, SEAMUS, the ISCM World New Music Days, SIGGRAPH, Gaudeamus, the Huddersfield Contemporary Music Festival, the SCI National Conference, Stanford Lively Arts, the Third Practice Electroacoustic Music Festival, the Ingenuity Festival Cleveland, and the Bowling Green New Music Festival, among others. His collaborative video piece Graveshift has been widely viewed and acclaimed as part of the Visual Music Marathon.
Bloland is currently an Associate Professor and head of the Composition and Music Technology areas at Miami University, Ohio. He is also a founding composition faculty member at the SPLICE Institute, and recently established the Composition program at the Montecito International Music Festival. He completed a five-month Musical Research Residency at IRCAM in Paris during the spring semester of 2013. He was previously a Visiting Assistant Professor of Computer Music at the Oberlin Conservatory of Music, where he served as the founding director of the Oberlin Improvisation and Newmusic Collective (OINC). Bloland has also taught at UC Santa Cruz, Stanford University, and the University of Texas. He received his D.M.A. in composition from Stanford University, where he studied with Mark Applebaum, Brian Ferneyhough, Chris Chafe, and Erik Ulman. At Stanford Bloland worked extensively at the Center for Computer Research in Music and Acoustics (CCRMA). He received his M.M. from the University of Texas at Austin, where he acted as the Electronic Music Studios (EMS) Manager and studied with Kevin Puts, Russell Pinkston, and Bruce Pennycook.
As a trumpet player Bloland has performed in a number of jazz bands and orchestras in San Francisco and Austin. He participated in the Bay Area Guided Improv Ensemble for several years and performed in OINC while at Oberlin.
As a researcher, Bloland has been investigating the interaction between literature and instrumental music, examining strategies employed by composers in reaction to literary influences. His dissertation, which drew heavily on these studies, involved the composition of a cycle of pieces based on a novel by the Norwegian author Pedr Solis. The Electromagnetically-Prepared Piano, an early invention of which he is the co-creator and primary composer, continues to receive attention. In addition to giving numerous lecture/demonstrations, he has composed a number of pieces for the device, written a paper (“The Electromagnetically-Prepared Piano and its Compositional Implications,” published in the Proceedings for the International Computer Music Conference 2007), and developed the website magneticpiano.com. Building on this work, his Musical Research Residency at IRCAM involved the creation of a physical model of the coupling between a resonator (such as a piano string) and an electromagnet.
Bloland was awarded an Ohio Arts Council Individual Excellence Award for 2014.
For more information please visit www.perbloland.com.
Website:

Walk now and then into the breath that blows coldly past...
for flute and percussion
8 E Instrumentation
Shadows of the Electric Moon
for snare drum and sonic exciter
6 E Instrumentation
Ordered by year. Most recent works appears first 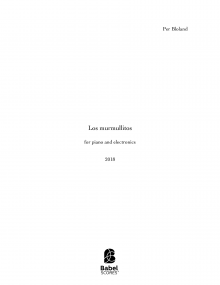 A Drift of Swine for flute, clarinet, piano and double bass (2013)
Walk now and then into the breath that blows coldly past... for flute and percussion (2011)
Of Dust and Sand For Alto saxophone and piano with electromagnets (2010)